The All Party Writers Group (APWG) and ALCS hosted an evening reception on 30 March 2022 showcasing the writers from A Writing Chance, in partnership with New Writing North and the New Statesman.

The APWG and ALCS recently had the pleasure of pairing up with New Writing North on two events in Parliament to showcase the work from A Writing Chance. The project opened in February 2021 to eleven new and aspiring writers from under-represented backgrounds who were mentored by industry leaders and had their work published in a special edition of the New Statesman. It sought to explore the theme of ‘A Dream of Britain’ with each writer dedicating their piece to an aspect of their upbringing or experience of the UK. 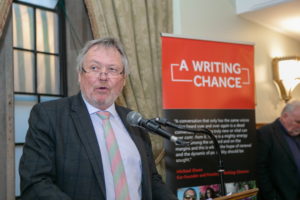 On 30 March, Lord Clement-Jones hosted a roundtable, bringing together leaders from across the creative sector including members of the Government, Arts Council England and publishing houses.

A discussion was held on the different barriers that block people from becoming an author, and how organisations can come together to put forward a more cohesive and joined-up approach to helping diversify the next generation of writers.

Speaking about opportunities in the creative industry, actor and co-founder of A Writing Chance, Michael Sheen, said: “Knowing that when I was growing up Richard Burton and Anthony Hopkins came from my town, an old working-class steel town, meant that I had never questioned that it was possible for me but there are so many people, so many young people out there who don’t see examples of themselves out there and certainly do not have pathways for it.” 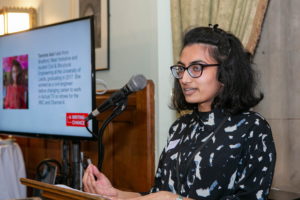 A Writing Chance participant Mayo Agard-Olubo spoke about feeling validated as a writer: “I had no idea how to get started [as a writer] …and [that] has been an experience of a lot of the writers on the programme… Sending our work into A Writing Chance gave the writers a lot of validation, that their stories mattered and that there were people interested in those stories.”

Lisa Pearson, Executive Publisher at Harper Collins, gave a publisher’s point of view: “We are trying to be representative and inclusive in terms of who we are publishing… our industry is very much serving the same people all the time in the same ways, so we have to step out of all of those spaces to go to new readers.”

Lord Neil Mendoza, Commissioner for Cultural Recovery, commented on the Government’s role within improving access to the arts. He said: “My thought is that now is an incredible moment to pursue something… The Government has a major levelling-up strategy which it has to deliver… you are not alone in this desire to get more inclusivity, access and diversity across your particular sector.” 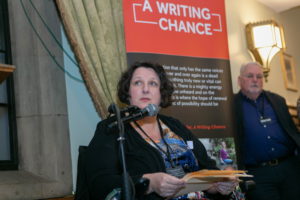 Giles Watling MP, Chair of the APWG, welcomed guests to the evening showcase in the House of Commons, where the aspiring writers read their pieces from the New Statesman online or on the stage. The pieces covered everything from fox hunting and hairdressing to the importance of the eleven plus.

Maya Jordan spoke about how society treats and values working-class individuals: “It was the lack of choice, the lack of options, the lack of expectations. The problem wasn’t me, even when you said it was. It wasn’t about being thick, or poor, or not being good enough.

Tammie Ash, a writer from Bradford, spoke on regional disparities in the UK. “I have wept in frustration trying to explain to privileged southerners how underfunded, disconnected and forgotten much of Yorkshire is, with many of its residents remaining oblivious to their potential, simply because we don’t have the facilities or infrastructure the South does.” 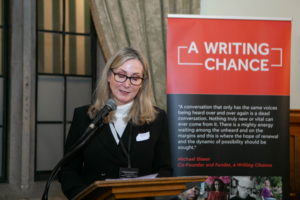 Barbara Hayes, Deputy CEO of ALCS, closed the evening with a few words. “I’d like to thank all the writers who presented their incredible work tonight, so many different perspectives on a set of diverse and interesting topics. It demonstrates why programmes like ‘A Writing Chance’ are meaningful, showing us what access and inclusivity can do for the writing industry. Making it more reflective of the UK and the different voices within it. It is an issue ALCS is very passionate about, so we jumped at the chance to be involved with the project.”