‘It’s like spinning plates’: Cecilia Knapp on making a career out of writing

We spoke to poet, playwright and novelist Cecilia Knapp about inspiring young people to write poetry, working for free versus for money, imposter syndrome, and how writing saved her life.

Cecilia Knapp is a poet, playwright and novelist. In 2020-21 she was Young People’s Laureate for London, for which she was honoured when she won the Ruth Rendell Award for her outstanding contribution to raise literacy levels in the UK. In March she published her debut novel Little Boxes. We had the pleasure of Zooming with her to discuss working for free versus for money, imposter syndrome, and how writing saved her life.

Your book Little Boxes comes out tomorrow.  I know. It’s scary… It’s like being naked in public. 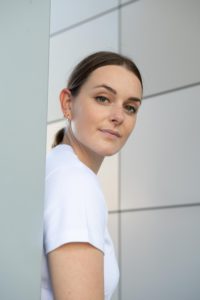 How did you become a poet?I sort of fell into it. I had moved to London when I was about 18 and I went to a drama workshop at The Roundhouse in Camden. It was actually a Spoken Word workshop, and I was hooked from then really, because it was the opposite to what I had experienced poetry until that point. It was just people in a room writing together in what felt like their very own voice about the things that were concerning them. It felt accessible and friendly and kind of current.

I trained myself to be a poet through going to free workshops basically, because I didn’t study Creative Writing at university. I started going to open mic nights in London. I found myself at the middle of a kind of really exciting, friendly poetry scene. And it sort of grew from there, just being visible and being out and about on the poetry scene led to performances and people asking me to teach workshops, [which] led to me getting an agent.

When did you become a fulltime writer? Was there a moment when you gave up your other jobs to go fulltime?I don’t think it was ever as straightforward as that. I worked in bars, temping, doing youth work and odd jobs as a receptionist alongside being a writer for the first years. I would go freelance and then things would go well for a little bit and then I’d do some temping again. I used to do 12-hour catering shifts and if I did four of them, I could focus on writing for the rest of the month. It was a bit of a juggling game.

I worked in bars, temping, doing youth work and odd jobs as a receptionist alongside being a writer for the first years.

[Then] I wrote a piece of theatre for the I O U Theatre based in Halifax. And that was huge for me because it was a really big commission, and then I performed it on a UK tour. That gave me the confidence and financial reason to not have to go back into more temporary jobs.

There is a weird sort of boundary with creativity, isn’t there? Because people deem it as fun and they wouldn’t align the work that you’re doing to the same level as a ‘normal’ job. So sometimes you do find yourself working for free or being asked to work for free. It’s a long time since I’ve said ‘yes’ to any free work, unless it’s for charity.

You were recently Young People’s Laureate and won the Ruth Rendell Award. How was that?I don’t do the work that I do with young people to get an award. I do it because I really felt that writing saved my life. I had a very turbulent childhood and somebody offering me something for free, a writing workshop, for free… I just remember how good it felt to write and to be seen. And then the fact that they didn’t want anything from me afterwards. It makes me feel choked up thinking about it. I always knew that I wanted to run workshops with young people. I knew that I loved finding inventive ways to get young people excited about writing.

I’ve got impostor syndrome and I’m like, Who am I to say no to anything? I’m so lucky that I can be a freelance writer.

What does your writer’s life look like?It’s so much juggling. A lot of the time being a writer isn’t just sitting at your desk and writing. Maybe one day a week, you’ll write or do reading or research and then the next day you’ll be doing all your invoices, planning your diary and getting back to emails. And then one of the days of the week, you’ll be teaching. And one of the days of the week, you’ll be planning for the following week. So it feels like spinning plates all the time. I have to really kind of protect that writing time now… I still really struggle saying ‘no’ to things. I’ve got impostor syndrome and I’m like, Who am I to say no to anything? I’m so lucky that I can be a freelance writer.

Celebrating excellence and learning at the ALCS Awards