The author of The Kissing Booth series on getting published as a teenager, the importance of engaging with her readers, and why, despite her writing success, she hasn’t given up the day job.

“After a couple of years of being an author, I understood what the income was like: inconsistent and unpredictable. Even when I was having a good year because of a film or translation deal, I realised my writing career might not be sustainable; it still might peter out at some point.” Via Zoom, Beth Reekles is explaining why, despite a storming start to her writing career at the age of 18, when her young adult novel The Kissing Booth was picked up by Penguin Random House, she still has a full-time day job.

I’d kept my writing going all through school and university, so I didn’t see why I couldn’t do the same while working.

As a teenager, Beth thought of her writing – done in secret from when she was a young child – as merely a “weird hobby” and didn’t share her work with anyone until she discovered story sharing site Wattpad. “I came to Wattpad as a reader first, but then thought: there’s a bunch of young teenagers who are using this site, and they’re writing too. They’re my people!” So, from the age of 15, she began posting her own work to the site. When she posted The Kissing Booth – a story of love and friendship set in an LA high school – a couple of years later, it became a smash hit with readers, and went on to garner almost 20 million reads on the platform.

Consequently, a week after sending off her UCAS application, she received an email from an editor at Penguin Random House who had spotted the huge popularity of The Kissing Booth on Wattpad and was keen to publish it. Says Beth: “I told my parents: ‘Someone wants to publish my book!’ And they said, ‘well you should still go to university’. And I thought: yes, that was always the plan. This doesn’t change that.” Following a physics degree at Exeter University, Beth fulfilled her ambition to work in tech and now works in IT for an energy company – a job she loves – while continuing to forge her writing career. “I’d kept my writing going all through school and university, so I didn’t see why I couldn’t do the same while working.”

Nevertheless, what Beth – now 26 – has achieved outside the 9–5 is highly impressive. In 2013, she was named as one of TIME’s 16 Most Influential Teenagers, just a year after publication of The Kissing Booth. It was followed by two more YA novels, Rolling Dice, and Out of Tune, with a second Kissing Booth novel Going the Distance published last year. Her third full-length Kissing Booth novel, One Last Time is published this August. Beth’s already high profile received another massive boost when a film version of The Kissing Booth premiered on Netflix in 2018, followed by a second film last year.

Beth’s average income from her writing: 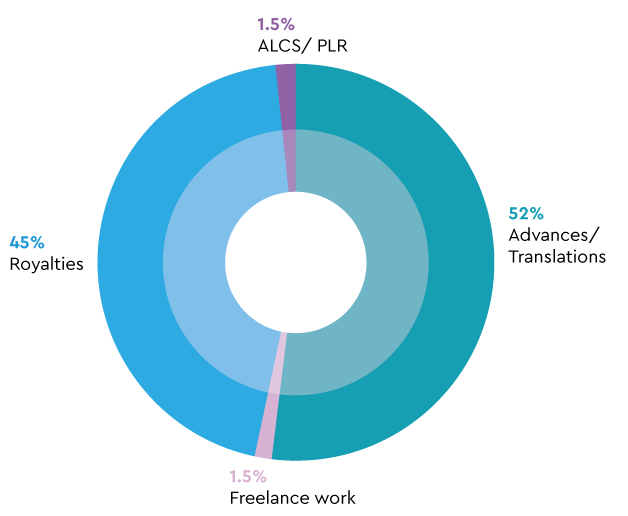 Beth’s writing maxim could be summed up as: “write what you would like to read and have fun doing it”. She famously wrote The Kissing Booth as an antidote to the vampire and werewolf fiction that was in vogue at the time. “One of the things I wasn’t finding in the books I was reading was the friendship element. Don’t get me wrong, I love writing romance but my friendships at the time were really pivotal. So it felt really important to write about that.” Now she is in her twenties, Beth has moved to write for a slightly older audience too. It Won’t be Christmas Without You, a seasonal novella for twenty-something adults was published in 2019, and her first full-length novel for that age-group, Love, Locked Down will be published by Sphere in February next year with the strapline: ‘Five couples. One week. A love story like no other…’. As its title suggests, it’s about the relationships between the residents of an apartment block who get to know one another better while locked down there. Beth tells me: “I really wanted to read a book about lockdown but a fun rather than depressing one. So I thought I’d just write it and put it on Wattpad because that’s an immediate way for people to read it. And then my agent liked it as well.”

Having enjoyed the community vibe of posting on Wattpad, Beth realised early on the importance of engaging with her readers, and so she did lots of research into social media and how best to use it to highlight her work. She still tracks her stats every month to monitor engagement and what is working well. “It’s such a good way to reach out to your audience, even if you’re just connecting with your existing readers to say: hey, I’ve got a new book coming out, maybe you’d like to pre-order one?” While Beth used to read every comment and reply to every message she received, as her writing career took off and her following grew, this began to take up too much time. So she replaced such individual interaction with regular blogs on the subjects she knows from the questions her followers are interested in, as well as life as a twenty-something. She also offers writing advice through Instagram Q&As: “I get a lot of questions from people wanting to know how publishing works. So I’m happy to have that dialogue just to demystify it a bit.”

Beth’s carefully nurtured community of readers has come to her aid on the occasions when pirated versions of her work have appeared online. “I remember one instance with a One Direction fan fiction website where one of my stories had been re-uploaded but with the characters’ names changed. And my Dad discovered a fake Kissing Booth novel for sale on Amazon. I’m in quite a lucky position because dedicated readers often spot work purporting to be by me and will message to tell me.” Wattpad has also been supportive, as have her book publishers, in taking action against such copyright infringements.

I’m in quite a lucky position because dedicated readers often spot work purporting to be by me and will message to tell me.

On her Twitter biog, Beth describes herself as “author, creator, popcorn lover”. So I ask her if the idea of being a ‘creator’ as well as an author is important to her. “Yes, because I used to say ‘author/blogger’, and then realised that this didn’t quite fit as a description because as well as writing books and blogs, I do YouTube, I go on podcasts, I like making silly TikToks. So I thought I’d call myself a creator because that’s exactly what I do: I create stuff.”

Beth is currently working on a new twenty-something adult novel and is meanwhile crossing her fingers that one of her other books will make it to the screen. “I’m hoping maybe my Christmas book because I really love those cheesy Christmas movies. And if I did get another adaptation. I’d like to be much more involved this time, now I have more idea of the movie-making process.”

And in the meantime, there’s the day job to do.

Beth Reekles is an author and creator best known for her series The Kissing Booth, which was adapted into a Netflix trilogy. Her debut adult novel Love, Locked Down is being released in 2022. She also has a full-time job in IT.