Award-winning historical novelist Stacey Halls tells us how she has built a successful writing career through a resolutely pragmatic approach to her profession.

“Don’t give up the day job” is the traditional advice given to those seeking to earn a living from writing. Novelist Stacey Halls had every reason to ignore this directive, however, after signing a two-book deal for a six-figure sum in 2017 on the strength of her debut novel, The Familiars. That novel – inspired by the 17th-century Pendle witch trials – went on to become the top-selling hardback debut novel of 2019, was a Richard & Judy pick and won a Betty Trask Award. TV rights have also been sold. Her second novel, The Foundling – also a bestseller – came out in 2020, and her third, Mrs England is to be published this summer. 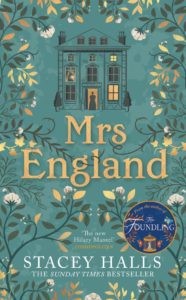 In fact, Stacey gave up her day job as a sub-editor on the magazine of a national newspaper only with the utmost reluctance, more than a year after landing her stellar book deal. “It just became untenable and something had to give. I loved my job but I reached burnout because I was still sub-editing four days a week, whilst also writing The Foundling and touring and doing lots of publicity for The Familiars,” she tells me when we speak via Zoom. “But it was a huge wrench to leave because I’m very much a comfort zone person.”

It’s both illuminating and refreshing talking to Stacey because while on the face of it she might embody the romanticised idea of ‘overnight success’ which people like to believe accompanies dream book deals, her career path is actually characterised by pragmatism and graft. Born in Lancashire in 1989 to parents who are market traders, Stacey was a lover of books and reading from an early age, but it was a long time before she realised that it was possible to make a living from writing. “I was always good at English and when I was about 15 or 16 I started to buy magazines; everything from Harpers & Queen and Vogue to Heat and Closer – I couldn’t get enough of them and thought I’d love to work on a magazine one day. I wasn’t very proactive, however, and no one in my family had ever been to university: I didn’t even realise you could study journalism. So all my friends went off to uni and I stayed at home and happily got a job at a solicitors as a legal secretary straight after A levels. But then I realised how much fun my friends were having, so a year later I applied to study journalism at university, and I absolutely loved it.”

In all the journalism jobs I’ve had I was one of just a few staffers with northern accents. We’d have girls in on work experience whose parents were putting them up in a hotel for two weeks while they did it. I was flabbergasted at the level of privilege involved

Having already spent a year in the world of work, Stacey tells me she approached her vocational degree course at the University of Central Lancashire as if it was a job, showing up to lectures and “taking it really seriously”. She applied for several work experience placements with magazines based in London, and did stints on the Sunday Times magazine, You magazine and the now no longer published, Waterstones Books Quarterly. It was this last placement which led to full-time work at The Bookseller magazine after she graduated, and then to her most recent role as sub-editor on Fabulous, The Sun’s weekend magazine.

As a working-class student from Lancashire, Stacey emphasises that she was only able to afford to take up such work placements because she had a cousin living in Surrey. “If I hadn’t been able to stay with her, I have absolutely no doubt that I would still be living in Lancashire and probably working in an office somewhere because I wouldn’t have been able to afford to stay in London – it just wouldn’t have been an option. But now having been in magazines, I know that’s how it works: you have to get your foot in the door in order to get even a junior job. In all the journalism jobs I’ve had I was one of just a few staffers with northern accents. We’d have girls in on work experience whose parents were putting them up in a hotel for two weeks while they did it. I was flabbergasted at the level of privilege involved.”

Having worked in the context of books, written reviews and interviewed authors while working at The Bookseller, Stacey began to nurture the idea of writing a novel of her own. After her first book was turned down by agents, she persevered and took an unpaid nine-week sabbatical from her job at Fabulous in early 2017, living off her savings to pay the rent and bills while she got a first 90,000 word draft down of her first published novel The Familiars. She continued to work on it alongside the day job, and finally sent it to four agents that August, not expecting to hear back for ages. But within days, three agents had offered her representation (the fourth was on holiday). By October, she had landed her first book deal.

While emphasising how grateful she is for her new day job (“I love it and can’t believe this is what I do for a living”), Stacey asserts that her “career as an author isn’t one I expected to have. I was always more one for the salaried job than the freelance life”. Being a novelist, even one who is selling in healthy numbers, comes with insecurities, she says. “My job is having ideas and following through on them. Thankfully at the moment, that isn’t a problem. But you’re only as good as your last book so it’s quite an intense way to live. I’ve been reading a biography of Daphne du Maurier and I totally identify with a lot of her anxieties because she was just so paranoid that her ideas would dry up. Even now as I’m beginning to work on Book Four, in the back of my mind I’m already thinking: what about Book Five – what’s that going to be?”

Once you professionalise your creativity, then it is work. I don’t feel in any shame in saying that I write to be paid and I think that probably comes from being a journalist.

I tell her how much I’m enjoying my proof copy of her compelling third historical novel Mrs England, which comes out in June 2021. “It’s the first one I’ve written as a full-time novelist so it was a completely different experience from the first two,” she tells me. We talk about the perennial challenge for writers of finding time and space to be creative while also earning a sustainable living. Does she think of her novel-writing as a job in the same way her magazine role was? “Once you professionalise your creativity, then it is work. I don’t feel in any shame in saying that I write to be paid and I think that probably comes from being a journalist. Because when you’re a novelist people have this romanticised notion that you must write whether you’re being paid or not. Perhaps it’s my background but I’ve never wanted to work for free and I believe that my creativity should be financially rewarded. Working as a writer isn’t something I ever dreamed of doing but now that I am, I definitely think of it as my job.”

Stacey Halls was born in 1989 and grew up in Rossendale, Lancashire. A journalism graduate from the University of Central Lancashire, she has written for publications including The Guardian, Stylist, Psychologies, the Independent, the Sun and Fabulous. Her first book, The Familiars was the bestselling debut hardback novel of 2019, won a Betty Trask Award and was shortlisted for Debut Book of the Year at the British Book Award. Now a full-time writer she lives in Oxfordshire.