Celebrating excellence and learning at the ALCS Awards

The APWG hosted the presentation of the Educational Writers’ Award and the Ruth Rendell Award at the House of Commons on 7 December.

The All Party Writers’ Group (APWG) hosted the presentation of two prestigious ALCS awards – the Educational Writers’ Award, and the Ruth Rendell Award – at a festive celebration at the House of Commons on 7 December. 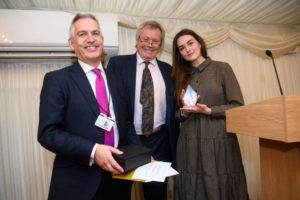 Giles Watling MP, Chair of the APWG, welcomed guests, who included a host of writers along with fellow MPs and members of the House of Lords. He paid tribute to the essential work of writers, particularly through the challenges posed by the pandemic, commenting that the purpose of the APWG – which now has 65 members from both the Commons and the Lords – is to “bring attention to how… important you [writers] are to the British way of life, and to British soft power around the world, making sure that you [writers] are always at the forefront of our thinking” 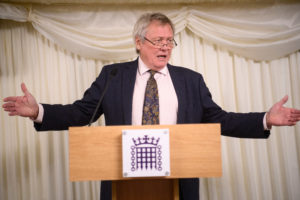 Poet, playwright and novelist, Cecilia Knapp won the 2021 Ruth Rendell Award for her outstanding contribution to literacy levels in the UK. The Young People’s Laureate for London 2020/21 has delivered various residencies for young people as part of her role as Spread the Word’s Young People’s Laureate, led free online workshops, and worked with young girls to explore issues such as #MeToo.

The award was launched by the National Literacy Trust (NLT) and ALCS in 2016 in memory of bestselling author Ruth Rendell, who was a passionate advocate for literacy and its potential to change lives. 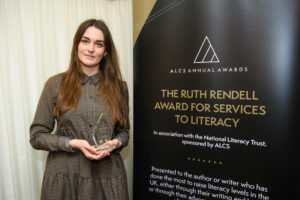 Accepting the award, Knapp acknowledged the “joy, recognition and empathy that comes from reading”. She said: “The empowerment, discovery and self-expression that writing enables should be felt by everybody”. Receiving the Ruth Rendell Award was, she said, “the cherry on a very delicious cake”.

Minister for the arts, Lord Parkinson of Whitley Bay announced the winner of the Educational Writers’ Award 2021, the UK’s only award for creative educational writing, which this year focused on books for 5-11 year olds. 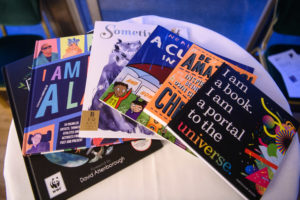 The winning book was Sometimes I Feel: A Menagerie of Feelings Big and Small, written and illustrated by Sarah Maycock, and published by Big Picture Press.

Sometimes I Feel explores common but complex emotions – including bravery, timidness, curiosity and happiness – through a collection of animal similes and poetic prose, accompanied by beautifully realised paintings of animals which embody each emotion.

The judges highlighted the winning title’s relevance to our times. “Linking feelings to relatable characteristics of animals is a fantastic way to teach children about the power of emotions; their temporary nature, and how we can respond to them in a healthy and helpful way. This book is a must-have for any primary classroom.” 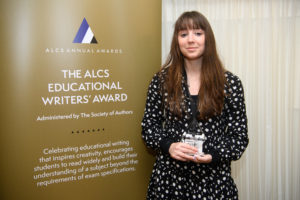 Accepting the award on behalf of winning author and illustrator Sarah Maycock, her editor said that they were thrilled the book had been recognised, particularly during such a difficult time for so many children.

The runner up for the 2021 Educational Writers’ Award was I Am Not a Label, written by Cerrie Burnell, illustrated by Lauren Baldo, and published by Wide Eyed Editions. The judges praised the book for encouraging young people to accept and embrace others for who they truly are. “The empowerment this book could give to young people living with a disability or chronic illness is fantastic, with the potential to really make an impact in overcoming misconceptions and celebrating difference.”

The creative industries are responsible for around one in 10 jobs in the UK, and contributed £116billion to the UK economy in 2019. 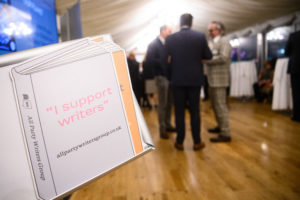 Lord Parkinson paid tribute to the way in which Britain’s vibrant writing scene had become even more of a lifeline for us all during the pandemic. He also acknowledged the continued importance of the creative industries, responsible for around one in 10 jobs in the UK, and contributing £116billion to the UK economy in 2019.

The Rt Hon Nadine Dorries, Secretary of State for Digital, Culture, Media and Sport (DCMS) showed her support via a recorded video, in which she said that as an author herself, she knew the “blood, sweat and tears that go into every novel, play and script”. She also acknowledged that the pandemic had made it difficult for many writers to carry on creating and highlighted that her main mission at the DCMS was to help open up all creative sectors to new writers from disadvantaged backgrounds, and she said she looked forward to working with the industry to make that happen over the months to come. Awards, she said, were the perfect chance to celebrate such new faces.