The winners of the UK’s longest-running and best-loved book awards for children and young people, the Yoto Carnegie Greenaway Awards were announced today in a ceremony at The British Library. ALCS is a proud sponsor of these Awards.

The Yoto Carnegie Medal is awarded to Katya Balen for her second novel October, October (Bloomsbury), illustrated by Angela Harding – her debut novel, The Space We’re In was longlisted in 2019. October, October is a “beautiful” and “captivating” story of a girl, October, who must learn to spread her wings after a childhood spent living wild in the woods changes dramatically the year she turns 11. The story was inspired by Balen’s father-in-law who lives off-grid, and her own love of mudlarking and the outdoors. 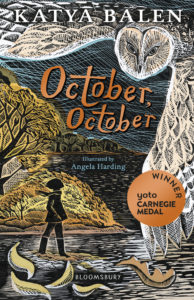 Danica Novgorodoff’s illustrated edition of Jason Reynolds’ 2019 Carnegie-shortlisted book, Long Way Down (Faber) wins the Yoto Kate Greenaway Medal – the first graphic novel to win since Raymond Briggs’ Father Christmas in 1973. It is her debut children’s book published in the UK and is an “innovative” adaptation of the original verse novel of gun violence and grief written by 2021 Yoto Carnegie Medal winner, Jason Reynolds (Look Both Ways). The book features hundreds of “stunning” watercolours depicting the decision that 15-year-old Will must make when his brother is shot.

October, October and Long Way Down, which are published by independent publishers Bloomsbury and Faber respectively, place readers directly into the main characters’ shoes as they face challenges that upend their lives. Through Balen’s poetic prose and Novgorodoff’s breath-taking illustrations, October and Will’s emotions are brought to life on the page. 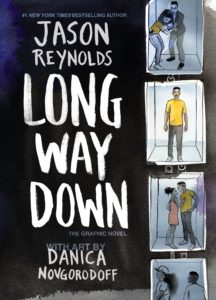 The books were praised by Chair of Judges Jennifer Horan for their ability to “build empathy” and “offer hope, comfort and enjoyment.” Both winners gave powerful speeches at the ceremony sharing their passion about the freedom and connection that stories in all forms can provide young readers, and the paramount importance of children being allowed and encouraged to read whatever they choose.

Balen’s October, October also scooped this year’s Shadowers’ Choice Award for the Yoto Carnegie Medal, after tens of thousands of young people across the UK and internationally read and debated the shortlisted books before voting for their favourites.

The winner of the Shadowers’ Choice Award for the Yoto Kate Greenaway Medal is The Midnight Fair (Walker Books) illustrated by Mariachiara Di Giorgio ­– an illustrator, storyboard artist and concept designer from Rome, Italy – and written by Gideon Sterer. It is a heart-warming, immersive wordless picture book that uncovers the secret life of animals who prowl a fairground at night, featuring sumptuous use of colour and contrast, which invoke all the senses.

The winners were revealed in a lunchtime in-person ceremony at The British Library for the first time since 2019. It was hosted by award-winning poet and novelist Dean Atta and featured Chair of Judges, librarian Jennifer Horan, alongside a selection of the young people who officially shadowed the 2022 awards. 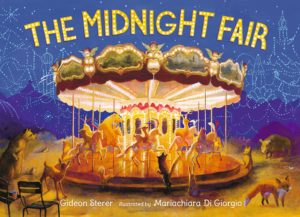 The Awards celebrate outstanding achievement in children’s writing and illustration respectively and aim to inspire and empower a new generation of readers.

Find out more at carnegiegreenaway.org.uk